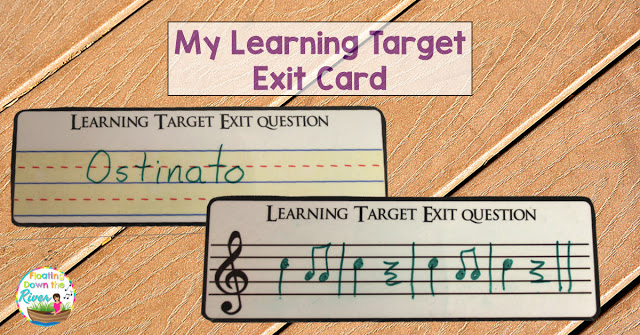 Our district has been working on learning targets this year. They want us to have one target for language arts and one target for math. As a music teacher, they want me to have one posted target for major concept for each half hour lesson, even though we do several things during a half hour. They also want us to assess that target. Most of our assessment as a music teacher is visual. That works well when our target is having each student conduct in 4/4 time, but sometimes, we need to know that each individual student knows something, either in written words or in written music.

I have thought carefully about how to assess without making my life more difficult, having over 500 students. I first made an exit card square on cardstock that I would have to cut out. Since I often have 10 or 11 half hour classes a day and 25 to 30 students in each, that would be a lot of cutting and a lot of paper, not to mention a lot of time to look at and record.

I came up with an idea last night to make an exit card that is write on/wipe off card with one side that has a place for writing letters and the other side a place for writing music. I am using vis a vis markers and they can wipe it off with a damp paper towel. I used it this morning with two 6th grade classes, and it worked well. I taught a lesson on Beethoven, reading out of the book on Beethoven from the series “Getting to Know the World’s Great Composers”. I love that they make it so relatable to the kids. 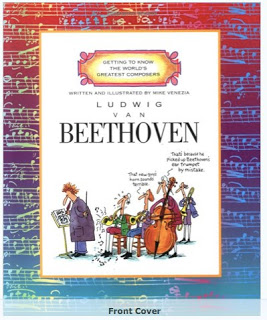 Get the book HERE.

My Target was: “I can give some facts about a famous composer”. I told them they would be expected to write down some facts at the end of class. I read some pages, talking about the meaning of things as I went. After we read a few pages, I asked students to tell me some things about Beethoven. Some of them could tell me a many things. We did several other things in our half hour, but at the end of class, I had each row go to their station, (see my stations HERE.) get an exit card and a vis a vis marker. Each student wrote down a few things he or she remembered and then came by the sink to show me. I checked what they had written, and gave them a small damp paper towel. They then erased it, put their materials away, and got in line. It worked pretty well. Now I just need to record the targets I have assessed. This one was easy. Every students hit the target. Some targets may be a little harder, but if I write down which students didn’t hit the target and then quickly record the rest who did, it shouldn’t be too hard.

Get my 2 sided Exit Card here.