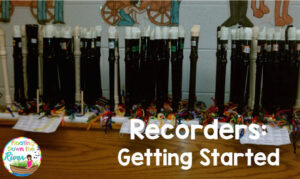 My recorder program, begun by my favorite mentor teacher, is based on folk songs, many that the kids have learned since they were in Kindergarten and first grade. I love how we learn the songs, play the games, learn to read and write music using them, and ultimately, play the songs on instruments. It makes so much sense.

I have decided to start recorder in 5th grade. All the grades leading up to that are spent getting the foundations of music under their belt.

Two years ago, I made major changes in the way I teach recorder and improved it more this past year, and it has been a tremendous success. The kids LOVE it and they learn to play well.

I begin the year doing many different songs, but also incorporate the songs with games that the students will be learning on recorder. The students know how much the other years’ 5th graders loved recorder, so they are begging to begin. We spend months learning our songs, singing them, reviewing the games, doing the sol-fa by sight and with our hands. We progress to reading notes on each song. This year I plan to spend some extra time playing some note reading games to be sure they are solid.

During this time, we talk about what will happen when we start recorder so the kids get very excited. I don’t hand out a note for the kids to take home until it is a week or two from starting because if a student takes home a recorder but doesn’t know how to play, that can be very frustrating. Because I have both English and Spanish Speaking parents, I send the note home in both languages. We have enough recorders at school for each student to use one there. The note gives them the opportunity to buy one for $5 for home use. Many of them eventually buy a recorder as they get excited about it. I have a letter in both English and Spanish in MS WORD, so you can edit it. Get it  for free HERE.

Every student gets a school owned instrument. Each instrument is numbered and sits on a recorder stand for his or her class in seating chart order. For instance the first student in the front corner would be B-1 (the B is based on teacher name). See my post on making your own recorder stands here.

I use crates for my music and utility boxes to keep track of my yarn and beads. See my organization, both past and present  and get free labels here. 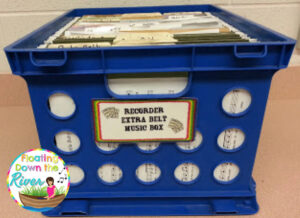 Finally, when it is time to start, I use this process:

1. I teach about care and how to hold the instrument before I even get it into their hands. I have talked about being careful with instruments from the time they are in Kindergarten, even with rhythm sticks, so they know that instruments are precious and require great care.

2.  On the first day of play, we talk about rules in recorder Before they get it in their hands. These are the rules we learn about. 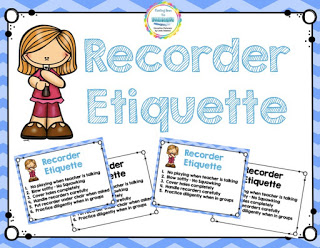 3. We learn how to hold the recorder with the left hand and discuss the fact that if the note doesn’t come out, there are only two possible reasons: Either they are blowing incorrectly, too soft or too loud; or they are not covering the holes. Get the recorder rules of etiquette  for free HERE.

LEARNING A AND C

4. I teach C and A first. We work on C as a group, showing them the note on the board, as well as the fingering with it, and then one row at a time plays their C for the class. I fix problems as I go. Then I will play C’s in various patterns and they will copy. We then work on A in the same manner. We play the first song, “Old Mother Witch” to begin. They have known this song and game since Kindergarten and love it. The look on their faces when they can actually play this song is priceless.

HOW TO PASS OFF BELTS

5. In the beginning of playing recorder, we do all of our work in a group, as written above. We work on a song and then pass it off in groups of 2 or 3 at at time. I give them a piece of yarn for the first song of the white belt and a bead for the second song. If a belt has 3 songs, they get 2 yarn belts and one bead. They love getting the beads.

I buy almost everything from Amazon.com. You can get large bags of pony beads for less than $6. See beads HERE.

I get the 1 inch ACCO loose leaf rings from amazon HERE.


******It is wise to spend some time talking about tying a double knot so the beads don’t fall off. Even so, you will find beads on your floor off and on. Oh well.

After students finish the orange belt (the third belt), they begin to earn small prizes that I purchase from Oriental trading company. For each belt after that, they earn a small prize, only when the entire belt is passed off. When a student has passed off all belts, their recorder will look quite colorful like this: 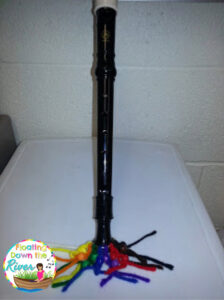 Once they get a black belt, I take their picture with my cell phone and put it onto a chart with many extra squares that I post on my bulletin board.  I insert the picture digitally in the black space.

The kids all love watching everyone earn extra belts. 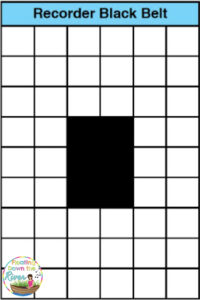 MY BLACK BELT MUSIC
My favorite mentor actually developed the original black belt system, using mostly songs from our district curriculum. I have made changes to some songs, and I just rewrote all of the music in Sibelius, my music composition program. I made it prettier, changed some songs to work better, and put fingerings with the new note name(s) for the belt, with the note(s) on the staff on each page. 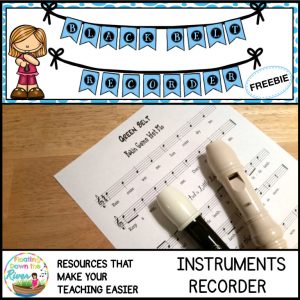 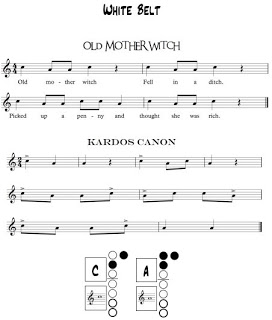 After the preparation I do before I hand the kids a recorder, some of my students get their black belt in a few weeks. I have spent hundreds of hours making extra belts that go with the chart above for when students have earned a black belt, many that are suggestions of the students. That is how we accomplish so much. Check out my Recorder Mega Pack HERE. 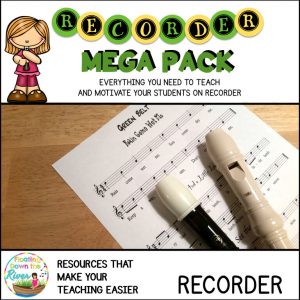 Instruments from Around the World
Next Post: Choir Music For My December Concert